‘Can you stand on your head?’ must be one of the most frequently asked questions when people discover I do yoga. Inversions possess an iconic quality and speak to the imagination. And yes. Yes, I do stand on my head. And my hands, forearms and shoulders. Almost daily. I love inversions, they are fun to do and they make me feel really good. But why?

Looking at scientific research is not very helpful at this time – there have not been many studies to the physiological and physical, let alone to the mental or psychological effects of a regular inversion practice, and the few studies that have been conducted often lack in significant results. Does that mean, then, that inversions are nonsensical? Or is it just an indication of how little research has been done in this field? With some educated reasoning and expert opinions, I have tried to outline the possible benefits of a practice of inversions here.

A word of caution though: it is always best to learn inversions under the guidance of an expert teacher. And when you are new to yoga, don’t be in a hurry! Inversions take time to learn – and being able to get up into a headstand, for example, doesn’t mean you can immediately *do* the pose; it mainly means you have reached your starting point to learn the pose. If you start doing too much, too soon, chances of injury are very real.

In the Netherlands, we’ve recently been flooded with news about Dutch astronaut André Kuipers who spent 6 months in the International Space Station. The devastating effects of zero gravity were clearly visible in the footage of the return of the astronauts in July 2012: the strong, fit astronauts had to be carried out of their vessel, and had trouble walking even weeks later. Loss of muscle mass and strength, and decreased bone density are the most eye-catching results of prolonged exposure to a zero-gravity situation. But since our cardiovascular circulation is also dependant on gravity, being in a zero-gravity environment will lead to blood-pooling in the chest and head and the extremities will have poor circulation. This goes to show that our circulatory system has evolved to work with gravity and has trouble functioning without it.

Some side-effects of gravity, however, are not so beneficial. It takes a lot of work from the vascular system to deliver oxygen-rich blood to the parts of the system that are above the pump (the heart) and also to retrieve blood from the lower parts of the body (think: varicose veins). Being upright for most of the day does take its toll. This is also one of the reasons why people with diseases or injuries are often encouraged to lie down – it reduces stress on the vascular system. It’s not a huge stretch to think that turning upside-down could also mitigate the effects of gravity on your circulatory system.

The cardio-vascular system might benefit from short periods of inversion, since circulation towards the head, heart and lungs is more efficient that way. It may temporarily lower your blood pressure and heart rate. David Coulter, author of Anatomy of Hatha Yoga writes in a 1992 Yoga International article on Headstand and the circulatory system “If you can remain in an inverted posture for just 3 to 5 minutes, the blood will not only drain quickly to the heart, but tissue fluids will flow more efficiently into the veins and lymph channels of the lower extremities and of the abdominal and pelvic organs, facilitating a healthier exchange of nutrients and wastes between cells and capillaries.”

Inversions also may improve circulation within your lungs. Being upright for lengthy periods saturates the lower parts of the lungs with blood, but inverting will ventilate the upper parts of the lungs, thereby promoting a more even oxygen-to-blood exchange and improving the quality of your lung tissue.

The lymphatic system could be positively influenced by inversions. This system is responsible for waste removal, fluid balance and immune system response. Lymph vessels transport proteins, fats, waste materials and extra fluids from tissues through lymph nodes and to the bloodstream. The lymph nodes produce immune cells to help the body combat infection, and filter the lymph fluid, removing foreign material such as bacteria and cancer cells. The lymphatic system does not have a pump, like the vascular system. It is dependant on muscular movement and gravity to move the lymph through the system. s a closed pressure system that has one-way valves (like the vascular system) that keeps lymph moving towards the heart. And when one turns upside down the pull of gravity helps to stimulate the lymph system. This is for instance why swollen ankles benefit from taking your feet up.

relieve stress on spine and muscles

There is some much quoted evidence from a study by L.J. Nosse indicating that spinal length increases and tension in superficial lumbar area musculature decreases with inversions. The pull of gravity will not only affect your circulatory systems, but also compresses the spine and taxes the muscles responsible for maintaining your upright posture into rigidity. Inversions, and in particular assisted inversions such as hanging upside down with ropes around your pelvis, will help your spine to decompress and the muscles surrounding the spine to let go.

Many people report on feeling a sense of calm and clarity when they come out of an inverted pose, especially headstand. This might have something to do with the increase of blood flow to the brain. Assumptions on how inversions create a base-line opening of blood vessels, making them more efficient at dilating and constricting to efficiently shunt blood to the active areas of the brain, have been made since the 1970′s and have since neither been proven nor invalidated.

Often, claims are made about the effect of inversions, shoulderstand in particular, on the hormonal system (especially through stimulation of the pituitary gland and thyroid by increasing the blood flow to those glands). There is not much scientific evidence for these claims, however on a case-by-case basis  yoga teachers report great progress in their work with women who suffer from problems around their menstrual cycle, menopause or fertility. Geeta Iyengar especially has done ground-breaking work on the application of yoga-asanas for women in different states of their life and a growing number of scientists are researching these subjects. However, so far none are focusing on the subject of inversions in relation to the hormonal system.

In general, most of the claims above pertain to a form of balance, or homeostasis, in the various systems of the human body. Simply the act of balancing upside-down requires strength in the core muscles, great body awareness, and a fine-tuning of the way muscles are working together to stabilise all the joints. So to say, in general, that inversions improve balance is not too much of a gamble.

While all the effects above might be scientifically likely benefits of inversions, many practitioners report other benefits, like better sleep and strong effects on the digestive system. Also, any activity that requires mindfulness and concentration, like balancing for a number of minutes in headstand, can improve your focus, and brighten up your mood. Doing things that give you the thrill of conquering your own fears, like jumping up into handstand, will give you a feeling of strength that transcends the physical level.

People suffering from high blood pressure, detached retina, glaucoma, hernias, cardiovascular disease, cervical spondylitis, slipped discs, trombosis, arteriosclerosis, and kidney problems should refrain from practicing headstand and shoulderstand. Those suffering from neck injuries should seek advice from an experienced yoga teacher before beginning to practice headstand. It is advisable for women during menstruation to avoid inversions. 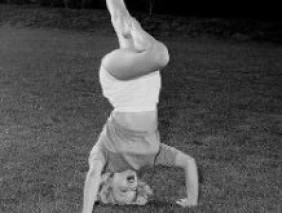 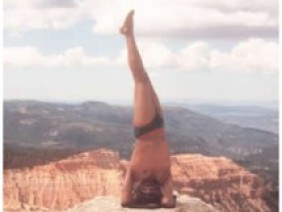 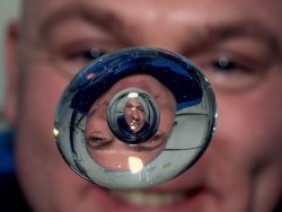 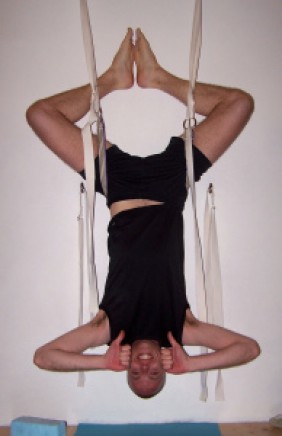